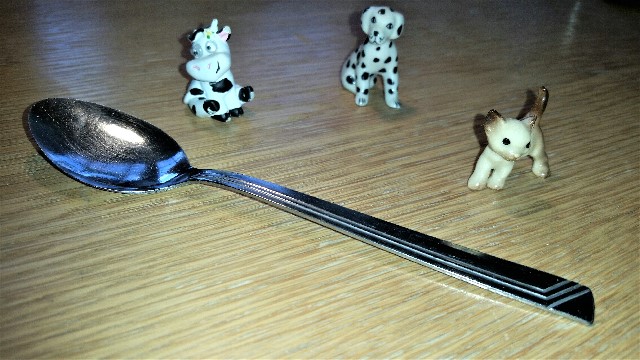 Stirring up a story

Sometimes free writing to a prompt takes an unusual turn. On this occasion the prompt was ‘An everyday item’. I don’t know why I picked a teaspoon, perhaps because I was with a group of writers where tea features heavily on the agenda. Anyway, what came of it is this quirky piece of life writing. Make of it what you will!

Hey Diddle Diddle,
The cat and the fiddle,
The cow jumped over the moon.
The little dog laughed,
To see such a sight,
And the dish ran away with the spoon.

This ancient piece of nonsense verse clearly proves that teaspoons are no ordinary pieces of cutlery. They may look like simple pieces of metal shaped for the convenience of tea drinkers, but their reality is far more complex. They insist on stepping outside of their everyday functionality like wanna-be reality show contestants, grabbing fifteen minutes of fame at every available opportunity.

Take the teaspoons that my mother cherished for example. Not satisfied with humdrum lives stirring sugar into hot beverages, these teaspoons battled with the fates to lay claim to the status of souvenir. Each one proudly bore a colourful enamel shield announcing its allegiance to a place of note: Skegness, Bournemouth, Great Yarmouth, Lowestoft.

My mother’s seaside teaspoons were my favourites. They had a sunny disposition, unlike their superior cousins from the country’s grand estates. I had learnt that one did not display a spoon from Bognor Regis next to one from Chatsworth or Sandringham. Oh no, the aristocratic spoons did not rub shoulders with those purchased from kiosks selling Kiss me Quick hats and sticks of peppermint rock. They were given a special display case appropriate to their status, while the other teaspoons were clustered together in a mug commemorating the Queen’s silver jubilee. Even in the world of collectibles class raised its divisive head.

Then there was the teaspoon that stole the show at Christmas. Always creative in her choice of gifts, my mother-in-law presented my husband with a commemorative teaspoon. It represented a worthy cause – probably some link to the RSPB because she knew he was a member – but who can recall the detail. What we loved was that this gift had clearly been sourced at a jumble sale. She had a passion for such events, being of the post-war generation that turned making-do and being thrifty into an art form. So, discarded and unwanted – perhaps not for the first time – here it now was. A second-hand teaspoon in a battered display box, wrapped in glittery Christmas paper and embellished with a bow saved from last year’s gift giving round.

My husband smiled and politely enthused over the gift as any dutiful son would. I swear the tarnished old spoon developed a new shine as it basked in the attention. ‘Look at me’, it whispered. ‘Special at last’.

So there you have it. Proof from my life that teaspoons, despite their size, all harbour illusions of grandeur. When you find your cutlery drawer devoid of them – for the pesky creatures are always vanishing into thin air – do not seek them in the compost bin amongst the potato peelings nor in the drainage pipe of the dishwasher. Instead look to the horizon and smile. They are out there somewhere – seeking a life of adventure, and fifteen minutes of fame.