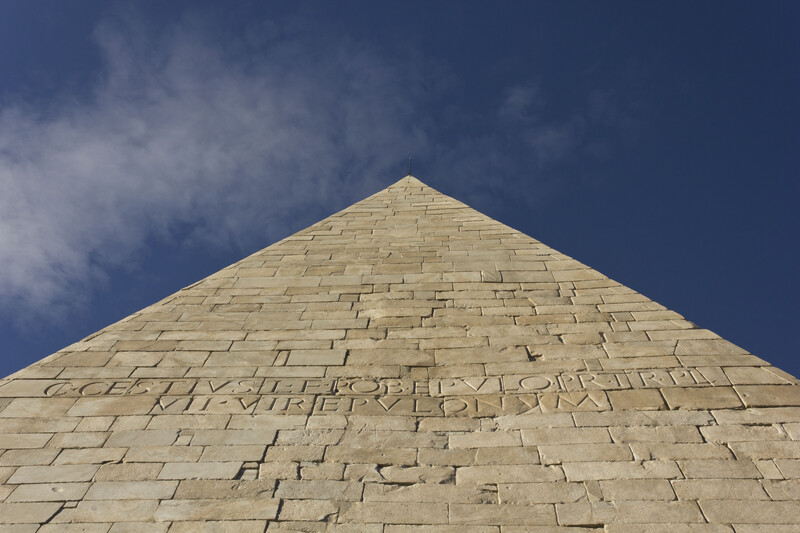 This short story was written in response to the single word prompt of ‘Rome’ and the challenge to tell a tale in 1200 words. Hunting around for ideas I was surprised to discover Rome had its very own pyramid built around 12 – 18 BC. Here is an entirely fictional tale of how that might have been birthed.

“Another day, another festival.” Gaius Cestius sighed as he gathered together the offerings for the Parentalia. “I wonder what our dead ancestors think of us leaving piles of salt and violets on their tombs once a year. Does it really placate them? Personally I’d think it a bit of an insult.”

“You think too much, my dear.” Flavia smiled fondly at her husband as she sprinkled wine over bite-sized chunks of bread in a small clay bowl. “I hope our children bring me violets when I’m gone. Such pretty flowers.”

Cestius selected one of the delicate blooms, and then crossed the room and tucked it into her hair. “I prefer to think of you adorned with flowers while alive.”

“You are a good husband, Cestius. And a good citizen of Rome.” She glanced towards the doorway. “At least the sun is shining today. Perhaps our ancestors are already pleased with our offerings.”

It was indeed a pleasant day. Cestius decided to enjoy the walk through the city streets with his wife and family in tow rather than bemoan the need to be seen fulfilling societal traditions. His position as one of the seven priests in the college of Epulones brought with it both prestige and popularity. As someone who arranged the feasts and banquets for the major public festivals, he was naturally courted by those who sought his custom – bakers, potters, butchers and carpenters. He welcomed this, for his greatest joy in his work was creating food that was also a work of art: culinary delights that thrilled both eyes and stomach. He was less keen on the attention of those who viewed him as a means to secure an invitation to these grand affairs. However, as men of all ranks greeted him deferentially he responded to all with warmth as he led his family to the cemetery housing his deceased relatives.

“Cestius!” A deep voice called his name from behind.

He glanced back and saw, much to his delight, the familiar face of one of his dearest friends.

“Valens! When did you return to Rome?”

Valens hurried to catch up with him. “Two nights ago. I had hope of meeting you on the road today. How are you, my friend?”

The two men exchanged the appropriate pleasantries, greeting one another’s wives and making complimentary remarks about each other’s children.

As soon as he could, Cestius demanded news. “Tell me about Egypt. Is Alexandria as magnificent as they say? What of the Great Library? And the lighthouse? Oh what I would give to see such a magnificent structure?”

Valens laughed. “The lighthouse is magnificent, but if you wish to be truly amazed let me tell you of the great pyramids in the desert.”

“You saw the pyramids!”

“Much more than saw, my friend. I journeyed into the heart of the greatest pyramid of all.”

They were still deep in discussion about the ancient tombs of the Egyptian pharaohs when they arrived at the cemetery. Cestius gazed at his family tomb with dismay. Although it featured a detailed bas-relief it was a small affair and relatively plain compared to some of the mausoleums owned by Rome’s elite.

“I think perhaps I should build a pyramid,” he said as he parted company with Valens.

“For yourself?” Valens shook his head. “You would be dead long before it is finished”

Cestius looked thoughtful. “Not for me. For Rome! For all who wish to see such a thing but who cannot travel to Egypt.”

“Cestius is building what?”

“A pyramid. An Eyptian tomb. Right here in Rome!”

Word spread fast. Slaves gossiped about it while going about their domestic duties. Women exchanged the latest news on this astonishing plan while bartering for the softest skeins of wool in the market. Men laughed and joked about such a wild dream as they soaked in the thermal waters of the communal baths.

Undeterred, Cestius drew up plans and then began to buy the raw materials he needed: marble for the outer facing; bricks and concrete for the inner structure. His biggest challenge would be finding the manual labourers he needed for its construction, but with this the gods showered him with favour.

Valens joined him at the building site one month into the project. Cestius was fretting over each brick as he oversaw the foundation work.

“If the foundations are wrong, everything will be wrong,” he confided to Valens.

Valens stared at the site for a long moment. “It is a bit smaller than I imagined. Not exactly on the scale of the Great Pyramid.”

“Indeed not.” Cestius rubbed at his aching forehead “I realised that to complete this in a reasonable time I needed to scale it down. So, the foundation is 100 square feet. The height will be 125 feet. It is big enough for a man of my stature I think. After all I am merely a priest, not a pharaoh.”

Valens smiled at this. “So how long will it take?”

“Five years?” Valens shook his head. “Everyone is talking about it. We will get them to help and challenge them to finish it within a year. For the glory of Rome!”

“Are you ready my dear?” Cestius’s wife was waiting at the door of their villa with the offerings for this year’s Parentalia festival.

Smiling he crossed to her, took a violet from the posy she was holding and placed it in her hair. “You are as beautiful as ever.”

Together with their children, they made their way to the cemetery. After completing the traditional rites they followed the crowd that had journeyed to admire the magnificent pyramid that now dominated the landscape.

“What do the words say, Father?” Cestius’ son asked as they strolled along its eastern side.

“That is your Father’s name and title,” his mother replied. “Gaius Cestius, son of Lucius, of the gens Pobilia, member of the College of Epulones, praetor, tribune of the plebs, septemvir of the Epulones.

“And what does this mean?” asked his daughter as they reached the western side.

Cestius translated the freshly inscribed wording for her. “The work was completed in 330 days, by the decision of the heir [Lucius] Pontus Mela, son of Publius of the Claudia, and Pothus, freedman.” He paused. “I wanted to pay tribute to Valens and the many friends who helped build it, but they would not let me. They said the dream of a pyramid in Rome was mine and so my name should be the one remembered.”

His wife smiled. “Well, I hope it will be many years before it needs to serve its purpose as a tomb. Look, I kept one small bunch of violets to offer here as a tribute to the gods, together with a request for them not to take you from me too soon.”

She stood before the pyramid, offered up her prayer and then placed the violets at its base.

She turned to look at her family. “A pyramid in Rome. Build in a year. That will, no doubt, puzzle the historians of the future. But enough of death and tombs. Let’s go home and enjoy the present.”