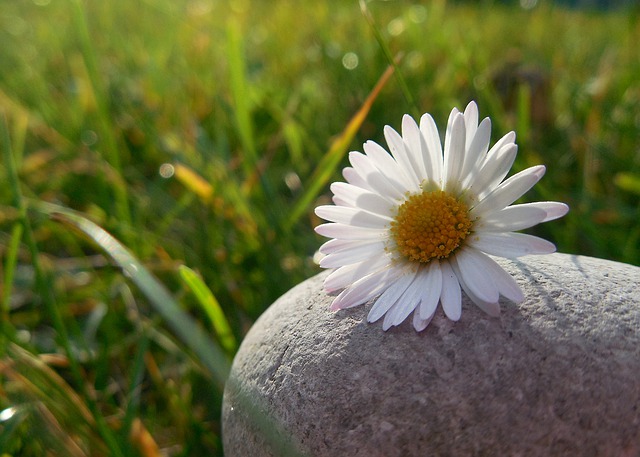 The gift of time

Some time ago I spend an afternoon sitting with a friend in a local charity shop. I was surprised by the number of people who came through the door with no intention to buy, but simply seeking human contact. This piece of flash fiction was birthed from that experience, and the knowledge that for some people, the only meaningful conversation they might have in the day is with the person behind the counter at the charity shop (see the BBC News story: Two third of UK adults have no one to talk to about their problems).

The gift of time

The musty scent of other people’s lives welcomed Fred into the clutter and chaos of the charity shop. He breathed it in, and smiled as he spotted Margery at the till.  Dearest Margery, with her fragile smile and unending patience.

A girlish hairclip was tucked into her wiry grey curls today. The trio of white flowers with egg yolk centres fixed along a golden clip spoke of long-ago summers, of daisy chains and picnics, of happier times.

‘I love the flowers,’ Fred said, tapping his fingers against his own thinning hair to indicate he’d spotted the adornment in Margery’s.

‘Why thank you, Fred.’ Margery’s sharply angled features were softened by the warmth of the compliment. ‘And how are you today?’

‘All the better for seeing you.’ Fred winked cheekily as he manoeuvred round the overly full rails of brightly coloured kids clothes placed near the door to lure in the school-run mums. Oh to have the nimble feet of youth! He squeezed past the rack of dull grey and brown menswear that whispered about tedious office jobs and missed opportunities. Finally he reached his goal: the bookshelves lining the rear wall. ‘Anything new?’

‘Somebody left a box of Catherine Cookson novels on the doorstep yesterday. Not your cup of tea, though.’

‘Indeed not. This, however …’ He plucked a map from the bottom shelf. ‘I do like old maps. They are like a promise of adventure.’ He fished his reading glasses out of his breast pocket, settled them on his nose and then read aloud, ‘Madeira Tour and Trail. Some lucky person has been on holiday.’

Margery brightened. ‘I went there with my husband back in eighty-four, or was it eighty-five?’

Fred smiled again, and readied himself for a morning of reminiscences.

‘Busy morning, I hope.’ Cath tossed her handbag under the counter, signed herself as present on the staff rota, and then peered at the till register. No cheery hello from her. She saw herself as an entrepreneur, and the charity shop as her stepping stone to a much grander retail role. Sales targets excited her.

‘Not particularly.’ Margery signed herself off the rota, and then pulled on her coat. ‘Fred came by as usual. He brought that map of Madeira I donated.’

‘Sad old git. Hasn’t he got anything better to do then spend every Tuesday in here buying maps and yakking to you? I don’t know how you have the patience to deal with all these time wasters.’

‘Charity isn’t just about money.’ Why did Cath always try to steal the joy from everything?

‘So you keep telling me, but this is a shop not a drop-in centre for every weirdo in town. You shouldn’t encourage them to hang around.’

‘I don’t encourage them, I just talk to them. What if I’m the only person they get to have a real conversation with all week?’

‘You’ll be wanting to serve tea and cakes next, instead of second-hand junk.’

‘Sometimes I wonder why you work here.’ Margery flinched at the sharpness of her own tone. She quickly changed the subject, determined not to let Cath drag her down to her level. ‘Is your daughter still living with you? Any news on her house purchase?’

Cath snorted. ‘Not a sausage. My place is still awash with her and the grandkids – noisy brats that they are. Why do I work here? Because I never get five minutes peace in my own home!’

Margery swallowed a stab of envy as she finished buttoning her coat. Not having children of her own when she was younger had been difficult to deal with. The consequence of no grandchildren was a recent pain as her friends moved into another fresh stage of life, leaving her with nothing to bring to conversations about a new generation of babies. But even that wasn’t the worst type of grief life had stored up for her. Oh George, how I miss you.

She handed the till keys to Cath, gave her a quick update on stock and headed out into the street. There she paused for a moment, shrugging off the sting of Cath’s words. She knew she made a difference here, and tempting though it was to give it up and avoid the daily encounters with Cath’s negativity, she wouldn’t walk away. Moments like the one with Fred were shafts on sunlight in her day. She would never have imagined her old map would be described as a promise of adventure. How wonderfully poetic. If only it was also prophetic. What she wouldn’t give for a new adventure.

Drawing in a deep breath she headed for home – and the waiting silence.

‘Not another map, Dad.’ Sarah bustled Fred into her kitchen, shaking her head at her father’s latest purchase.

‘It’s not my fault,’ Fred protested, tossing the well-thumbed guide to Madeira on to the table.

‘Grandad!’ Two-year-old Jamie barrelled into the kitchen. He wrapped himself around Fred’s legs, and then squealed with delight as Fred picked him up and tossed him into the air, catching him in a hug.

‘And how are you, young man?’ Jamie’s reply was a bear hug that transferred biscuit crumbs from his face to Fred’s pristine white shirt. Laughing, Fred kissed the top of his head, and then set him down.

‘Madeira?’ Sarah asked, putting a mug of hot tea next to the map.

‘I think Margery planted it for me. She went there with her husband once. Poor woman, she misses him so much.’

‘You know, one of these days she is going to catch on to you. And besides, you’re supposed to be retired.’

‘Thirty years as a bereavement counsellor and what do you do with your free time? Spend it hanging around charity shops pretending to be some lonely old guy with too much time on his hands.’

‘Is that really so bad of me?’

She simply smiled at him. ‘Drink your tea, Dad. Michael wants us to meet him at three. Something about finding the perfect premises for a new drop-in centre in town. He thought you might be interested in seeing it.’

‘Interested? Absolutely. We’d talked about doing something like this together, but I didn’t think he was particularly keen.’ He sipped his tea, his mind filling with ideas. Almost immediately his thoughts drifted back to Margery. Would she be interested in running a coffee shop instead of flogging old maps and second-hand hairclips? He had a feeling she would. Perhaps next time he dropped by the charity shop he could offer her a promise of adventure rather than the memory of one.

‘You look like a cat that has the cream,’ Sarah commented.

Fred’s smile grew even wider. ‘Just dreaming of the future, my love.’